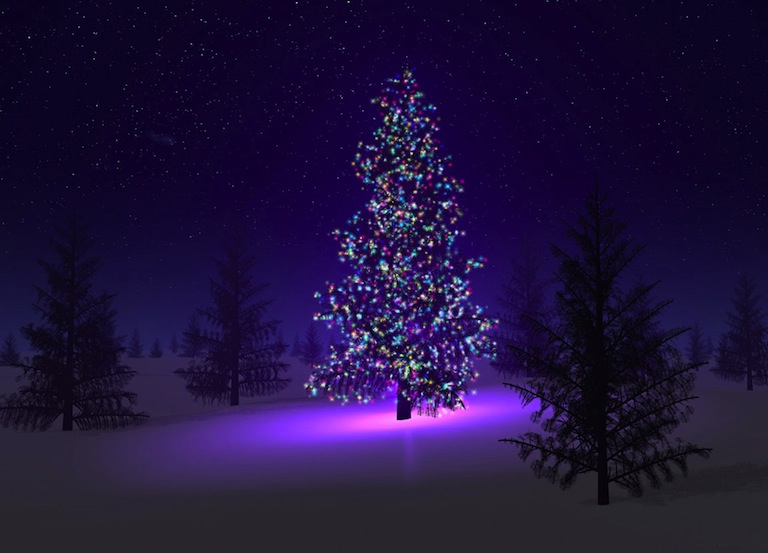 The First Light
Christmas is one of the most well known of the Winter Holidays in the wold, and every culture that celebrates Christmas has is own quirks and traditions. But before we began calling this holiday Christmas, it was called Yule, which celebrated the Winter Solstice, and represents the rebirth of light.

Christmas trees peer out of almost every window on the block that I live on; ancient symbols that have transcended time and still serve to acknowledge the shift of the earth on its axis, promising a return to the Sun and reminding us that despite the harshness of Winter, better days are coming. As a child, I always thought that Christmas trees were a modern invention, not knowing that this was mankind’s earliest representation of continuing and eternal life. The Christmas tree has its origins in the Pagan Yule celebrations, but using evergreens as a decoration was commonly used in the Roman and Greek cultures during their winter celebrations.

Where it all began

The idea to use an evergreen during Christmas originated in 8th Century Germany, where legend has it that St. Boniface was trying to convert a group of Druids. He tried everything that he could think of to convince the Druids that the Oak tree was not sacred or invincible. He finally tried one last desperate measure… he cut the oak tree down. As the tree fell, it took down everything in its path, save but one small evergreen sapling. St. Boniface declared it a miracle and that the evergreen was sacred to the Christ-child, and ever after, trees were brought into the home and decorated for the holidays.

Pagan and Christian families would bring a live tree into the home so the wood spirits would have a place to keep warm during the cold winter months. Bells were hung in the limbs so you could tell when a spirit was present. Food and treats were hung on the branches for the spirits to eat and a five-pointed star, the pentagram, symbol of the five elements, was placed atop the tree. The colors of the season, red and green, also are of Pagan origin, as is the custom of exchanging gifts.

Another reason that trees were first decorated with fruits, nuts and artificial flowers was to bring about the return of spring and fertility, warmth, and light, and to restore and maintain the balance between darkness and light, coldness and warmth, and death and rebirth. In pre-Christian times, the celebration centered around the longest night of the year when Goddess gives birth to the Divine Child of Promise. His is the promise of summer and the return of the sun. In early civilizations, as the days grew colder and the nights grew longer and darker, candles and fires were lit to lure back the sun. At this “time of darkness”, while the Earth was sleeping, many did not survive. Winter was a time of death and stagnation. Shelter was drafty, disease was common and food was scarce. The night of the sun’s “rebirth” was celebrated with much joy. From this day forward, the days would become longer. Even though the cold and darkness still prevailed, hope was renewed and the people began to look forward to the warmth of summer.

Yule was not celebrated in early Celtic traditions. It was brought to Britain by the invading Saxons who viewed Yule as the “turning time”. Yule literally means “wheel” in Old Norse. Because the symbolism of the wheel was so important to this Sabbat, it became a day sacred to Goddesses of the spinning wheel. Wreaths were a popular representation of the endless cycle…the Wheel of the Year.

Evergreens were sacred to the Celts because they did not “die” thereby representing the eternal aspect of the goddess. Mistletoe represented the seed of the God, and at Midwinter, the Druids are said to have gone deep into the forest to harvest the mistletoe. They cut the mistletoe with a golden sickle and caught it in a white cloth for it was not to touch the ground in deference of its sacredness.

Yule is celebrated by fire and the use of a Yule log. A piece of the trunk from your current Christmas tree is saved and kept through the year to protect the home, and was thought to bring the home prosperity and good luck throughout the year. That piece is then used for the next year’s log.

The Yule log, a fertility symbol, was usually cut from the God-related oak tree. Originally, the Yule log was brought into the home amid much dancing and ceremony before being lit in the fireplace. The Yule logs are then decorated with holly and evergreens to symbolize the intertwining of the God and the Goddess who have been reunited on this day. Bayberry candles are burned to ensure wealth and happiness in the coming year.

Mediterranean traditions include the legend of La Befana. La Befana is a character in Italian folklore who delivers presents to children throughout Italy, similar to Saint Nicholas or Santa Claus. The character may have originated in Rome, then spread as a tradition to peninsular Italy. A popular belief is that her name derives from the festival of Epiphany, but there is evidence to suggest that Befana is descended from the Sabine/Roman goddess named Strina. In the book Vestiges of Ancient Manners and Customs, Discoverable in Modern Italy and Sicily, by Rev. John J. Blunt (John Murray,1823) the author says:

“This Befana appears to be heir at law of a certain heathen goddess called Strenia, who presided over the new-year’s gifts, ‘Strenae,’ from which, indeed, she derived her name. Her presents were of the same description as those of the Beffana—figs, dates, and honey. Moreover her solemnities were vigorously opposed by the early Christians on account of their noisy, riotous, and licentious character”.

In popular folklore Befana visits all the children of Italy on the eve of 6 January to fill their socks with candy and presents if they are good or a lump of coal or dark candy if they are bad. Being a good housekeeper, many say she will sweep the floor before she leaves. The child’s family typically leaves a small glass of wine and a plate with a few morsels of food, often regional or local, for the Befana.

She is usually portrayed as an old lady riding a broomstick through the air wearing a black shawl and is covered in soot because she enters the children’s houses through the chimney. She is often smiling and carries a bag or hamper filled with candy, gifts, or both.

So whether you celebrate Christmas in the modern tradition or leave treats for La Befana, I wish you all Merry Christmas, and my best wishes for a happy, healthy and prosperous New Year